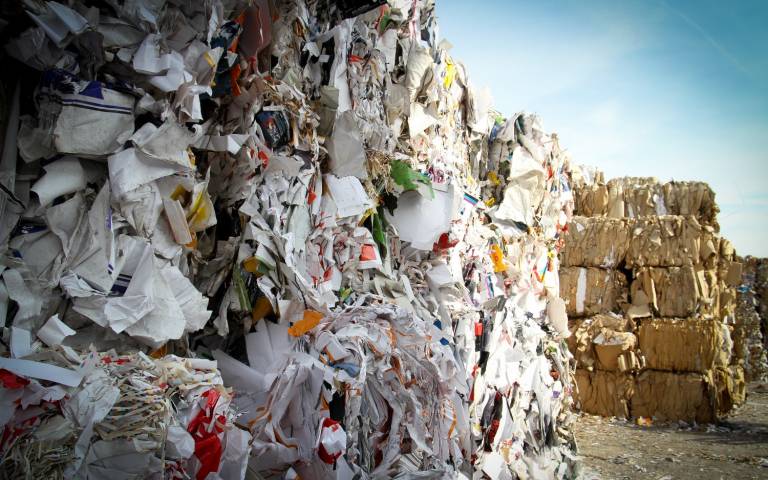 (From the UCL press release)

Recycling paper may only be helpful to the climate if it is powered by renewable energy, according to a new modelling study by researchers at UCL and Yale.

The study, published in Nature Sustainability, found that greenhouse gas emissions would increase by 2050 if we recycled more paper, as current methods rely on fossil fuels and electricity from the grid.

The researchers modelled various scenarios for increasing recycling of wastepaper by 2050 and the impact this would have on greenhouse gas emissions. They found that if all wastepaper was recycled, emissions could increase by 10%, as recycling paper tends to rely more on fossil fuels than making new paper.

However, the researchers found that emissions would radically reduce if paper production and disposal were carried out using renewable energy sources rather than fossil fuels.

Making new paper from trees requires more energy than paper recycling, but energy for this process is generated from black liquor – the low-carbon by-product of the wood pulping process. In contrast, paper recycling relies on fuels and electricity from the grid.

Researchers found that modernising landfill practices, for instance by capturing methane emissions and using them for energy, also had a positive effect, although not as profound as moving to renewables.

Lead author Dr Stijn van Ewijk (UCL Institute for Sustainable Resources and Yale Center for Industrial Ecology) said: “Our study shows that recycling is not a guaranteed way to address climate change. Recycling of paper may not be helpful unless it is powered by renewable energy.

“We looked at global averages, but trends may vary considerably in different parts of the world. Our message isn’t to stop recycling, but to point out the risk of investing in recycling at the expense of decarbonising the energy supply and seeing very little change to emissions as a result.”

Senior author Professor Paul Ekins (UCL Institute for Sustainable Resources) said: “The recycling of some materials, for instance metals, can lead to a very large reduction in emissions. But we need to be careful about assumptions that recycling, or a circular economy in general, will always have a positive effect on climate change.”

The researchers reported that paper accounted for 1.3% of global greenhouse gas emissions in 2012. About a third of these emissions came from the disposal of paper in landfills. Researchers said that in coming years, use of paper would likely rise, with the move away from plastics leading to increased demand for paper packaging.

The study looked at how different levels of recycling, renewable energy use and more environmentally friendly landfill practices might affect our ability to reduce emissions in line with a target to avoid a 2-degrees Celsius temperature rise by 2050.

It found that if past trends continued, emissions would slightly increase from the 2012 level (721 metric tonnes of carbon dioxide equivalent in a year) to 736 metric tonnes in 2050, with efforts to reduce emissions outweighed by increased demand for paper.

A radical programme of recycling, with landfill and energy uses remaining on the same path, would increase this still further by 10% (to 808 metric tonnes), with savings due to a decrease in total energy use outweighed by an increase in the use of high-carbon electricity.

Researchers explained that, while paper recycling can save trees and protect forest carbon stocks, the extent of this is unknown. This is because of a lack of understanding of the global forest carbon stock and the interrelated causes of deforestation. The analysis, therefore, assumes that recycling neither harms nor benefits forests.