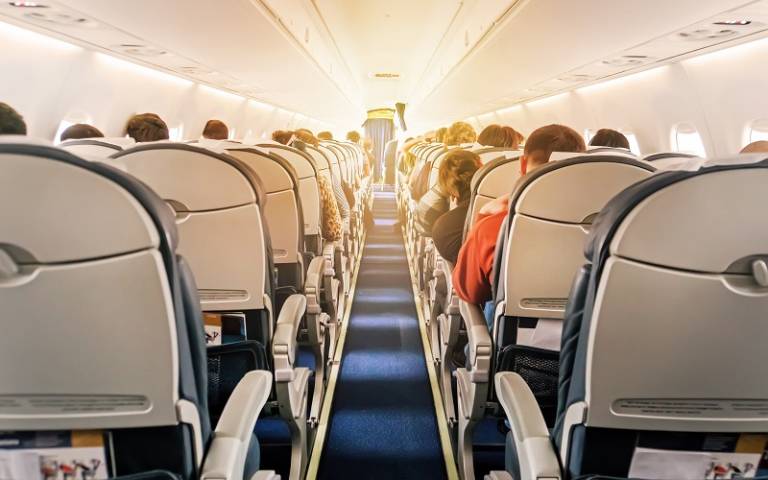 (From the UCL news release)

Allocating passenger aircraft emissions using airfares rather than travel class would give a more accurate idea of individual contributions, finds a study led by UCL.

Emissions calculators base their estimates on travel class, assuming that someone travelling in a higher class and therefore taking up more space on the plane is responsible for more emissions.

The study, published in Environmental Research Letters, describes how including airfares in calculations shows which passengers contribute the most revenue to the airline operating the aircraft, thereby allowing the plane to fly.

Although in general, premium (business) seats are more expensive than economy, the researchers found when looking at data that many late bookings in economy class, often made for business trips or by high income travellers, cost as much as, or more than, premium seats.

Lead author Dr Stijn Van Ewijk (UCL Civil, Environmental & Geomatic Engineering) said: “The paper shows we should follow the money when calculating emissions of individual travellers, as it is revenue that decides whether an airline can operate a plane or not. Someone who has paid twice as much as a fellow traveller contributes twice as much to the revenue of the airline and should be allocated twice the emissions. The seat size of each travel class, which is currently used to allocate emissions, is only a rough approximation of how much passengers pay.”

The researchers say that using airfares to calculate passenger emissions would benefit efforts to address climate change by encouraging people on all budgets to find alternative modes of transport where possible. It would also increase estimates of corporate emissions because it allocates more to expensive late bookings, which are often made for business purposes.

Implementing a tax that is proportionate to the price of the ticket could make the total costs of flying fairer. People buying the most expensive tickets would pay the highest tax, encouraging them to seek alternatives.

Whilst taxes differ between countries, typically the rates are the same across each travel class. Travellers buying expensive tickets, who are more likely to have higher incomes, pay a relatively low tax and are not currently discouraged from flying.

Dr Van Ewijk added: “An equitable approach to reducing airline emissions should not just deter travellers who can only afford the cheapest early bookings but also the big spenders who bankroll the airline. By assigning emissions based on ticket prices, and taxing those emissions, we can make sure everyone pays their fair share, and is equally encouraged to look for alternatives.”

A ticket tax should also take into account the distance flown and the model and age of plane, which can indicate how polluting it is.

The authors used a dataset from the USA to test their fare-based allocation approach. They used the Airline Origin Survey database, which includes ticket fare data, origin and destination, travel class and fare per mile. From this, they calculated the distribution of ticket prices across all passengers on a typical flight.

Based on the price distribution, the authors allocated emissions to passengers, and compared the results with estimates from widely used emissions calculators. Since ticket prices vary strongly by time of booking, the emissions per passenger varied too, far more than on the basis of seat size and travel class.

Using an economic supply–demand model, the researchers estimated how a carbon tax on emissions would affect travellers, depending on whether the emissions the tax applied to were calculated from seat size and travel class, or the airfare. In all scenarios, a tax on emissions calculated from airfares had a more equitable effect because it reduced flying more evenly across income groups.

The researchers hope to effect policy change in calculating and taxing passenger emissions, to ensure travellers on all budgets are encouraged to seek other forms of transport where possible or consider how essential the journey is.